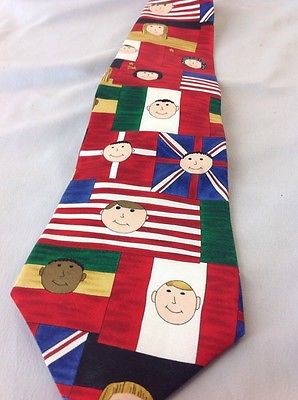 My tie was just a tie.  I had worn the same tie to the same event for the past two years.  As I gathered my clothes for this year’s event, I made a particular effort to locate a different tie, telling myself that maybe I had one that would look better—I ended up wearing the same ol’ tie. Why not anyway?  The tie was perfect for the occasion, a celebration of the life of Dr. Martin Luther King, Jr.

Though the picture above is not of my actual tie, the two look the same.  In short, this is the story of why after nearly twenty years of ownership, I no longer have this tie.  With that in mind, let’s move forward.  The event went on as normal, a great inspiring occasion.  For some reason, this year, the longtime pastor of the church where the event is held, noticed my tie.  It was when the event had come to an end, and as the musical postlude poured from the choir loft.  The pastor, who had been seated on the opposing side of the podium from me, made his way across the stage where he and I eventually exchanged sentiments.  The last words he said to me were, “That’s a great tie.”  I replied to him with, “It takes a special person to recognize a special tie.”

I’m not sure why he noticed my tie this year, I had shaken his hand with the same tie on for the two prior events.  Maybe it was the difference in the lighting on the stage.  You see, the previous years I was an usher for the event, this year I was seated on stage—yes, maybe it was the light.  Nonetheless, at this point, my tie became a great tie.

As the event wrapped up and the rumble of capacity lulled, I found myself waiting for the guest speaker to finish exchanging dialogue with all of those interested.  He took time with each one, smiled, and offered meaningful exchanges.  My work was done—but I lingered. In my mind I believed it prudent to “see him off” and to make sure nothing more could be done for him before he left.  I could tell at this point he had arrived alone.  When he had shaken every hand, taken every picture, and signed every autograph, we walked together, engaged in conversation on the way to his vehicle.  While he situated the items from the event for transport.  I stood close, near the driver’s side mirror, he opened the driver’s door, put some items in, closed it, opened the rear door, placed some items inside and closed it.  As he moved back toward me he lightly tapped my tie with the knuckle of his forefinger and said, “You know we use to have this thing called [tie-take].”  He explained this as a matter of exchanging ties with others as a networking tool.  “We should bring that back,” he said, and as he spoke he looked down and touched his own tie—purple with a pattern of small orange dots.

To this day I don’t know the “we” he was referring to, but I turned my tie over to expose the keeper loop and shared with him the tie was from The Children’s Foundation—a novelty item meant to inspire the calling to “save the children.”  To me the tie represented unity despite difference.  It always put the song Jesus Loves the Little Children of the World in my head.

I am not sure why, but in that moment, as my hands reached up to the knot in my tie, I explained to him that I had worn that tie to (now) the last three of these annual events.  I told him I wouldn’t be a part of the event in the future, at least not in the capacity I was that day.  And I said, “You know what…I want you to have this tie.”  “You sure?” he asked.  I responded with “Yeah, I think you can use it.”

It was at this point my tie morphed from a great tie, to something much more special.  Yes, for me the gesture brought closure to my role concerning the event.  But moreover, in that moment, I meant to inspire the person who had just moments before inspired over six hundred others, who over his lifetime and on many occasions performed in front of tens of thousands, and who will likely forever be remembered.  I meant to make real to him that there is no other time, only now.  The words I had just moments before spoken to the pastor came to life.  And with a feeling I cannot explain, we parted ways.

It wasn’t a tie-trade—I didn’t get his tie.  In the instance it didn’t remotely cross my mind.  I wanted him to know he was special in a real way.  As we inhabited that particular space on earth it was as if all around us stood still.  I wanted him to know that despite our differences, we were the same.  To me, my tie became a moment in time.  A piece of history.  From time to time, I wonder what it meant to him.

Originally written January 2017, this article is finally published and dedicated to a true superstar.  To him, I say once more “We will see each other again.”

Jordache Williams is currently based in Rock Hill, SC and is the CEO for Atlas Concepts, LLC.  Additionally, he is a Licensed Professional Counselor Associate and Certified Life Coach.